Holey Moley is a simple to play, fast-paced game where you smack moles about with hammers, pretty simple stuff, 3 modes of play including:

Quick Play
Hit as many moles as you can in 60 seconds
Survival
Survive the Moley Onslaught and defend yourself with power-ups!
No-Miss
You miss a hit, you die, simple as that!

Each play mode has 3 different difficulty settings which ramp up as the player progresses to keep the game challenging at all levels.

But wait, we added a 2 player mode also!

Yes, with the magic of a Standard controller (bluetooth or otherwise) you can pit your skills and reactions against another player and use battle items to thwart your opponent whilst boosting your own score!

This works across each play mode and really adds to the tension. 2 players can share the same controller for true head to head gaming or use seperate controllers instead.

After having some success with Super Grid Run I felt I should make another simple game to release for free. Holey Moley started off as a quick 4 hour game made for a Ludum Dare warm-up, just to see what I could make within 4 hours.

I was quite happy with what I'd done, okay, it's not an original game by any stretch of the imagination but felt fun enough to expand upon and has given me more experience within unity and more insight into making a complete game and taking it to the end, adding all the trimmings that are necessary.

I had a couple of setbacks mid-way through development due to power outages which ended up with losing a months worth of code which really bit me, I wandered whether or not to finish off the project I had started or to move on to another game in-the-works.

Thankfully I chose to press on with this project until completion, which has taken a lot longer than it really should have done, but I still only get a couple of hours here and there in the evenings to develop games so it is to be expected I guess.

Anyway, the game is finished now and it's time to move onto my next game, something a bit larger than the previous two, wish me luck!

Ryan Carson is a web developer, designer and indie game maker who runs a small website company called Refresh Creations in Paignton, Devon. He has a strong passion for both creating and playing games (more on the creating side nowadays) and is lucky enough to have a wonderful wife and little boy who are really great!

Available for FREE on: 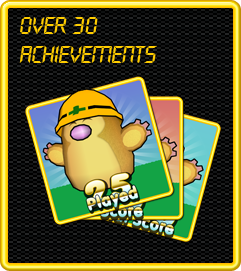